You’re camping at Lake Cathie (pronounced cat-eye), when, suddenly, out of the darkness emerges a constellation of red points as in the figure above.

Your first thought is that a swarm of fire-flies are approaching, but then you notice the points are almost perfectly still. Almost.

Then you hear the breathing.

Who, or what, is out there?

You pick up your flashlight to reveal the following: 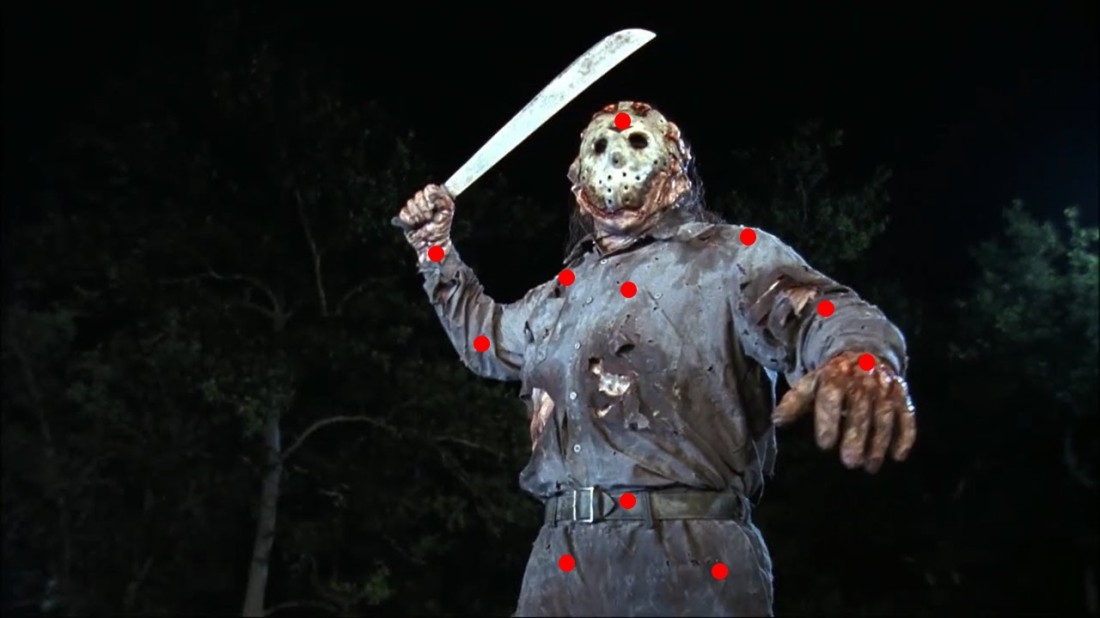 You can use your imagination what happens next.

It turns out that your killer, J. Voorhees, is running an experiment on biological motion. Voorhees is a PhD student from Charles Sturt University’s Port Macquarie campus, which is about 20 kms north of where you were camping. Every overcast or new moon night, soon-to-be doctor Voorhees has donned a jumpsuit, gloves and hockey mask, and found a new victim to target.

On top of these clothes, our antagonist has affixed point-lights that can be switched on or off. The point-lights are kept dim until a suitable victim has been selected from a dark environment – the killer’s favoured haunts are unpowered campgrounds. Once a victim has been chosen, Voorhees switches on the lights attached to the faded and torn jumpsuit, then employs one of three experimental conditions:

Unfortunately, you were in the ‘keep still’ condition, and as predicted, you died at the blade of our eccentric experimenter. (Now you keep still… forever.) So far, Voorhees’ hypothesis is yet to be beaten. Voorhees notes in a spiral-bound lab book that “Keeping still before attack is the optimum mode of killing, at least when your victim’s sight of you is reduced to a collection of light points.” Why is that?

Research shows that we can make fairly accurate judgements about others, even in the absence of familiar clues to their form – a visible face, body contour, hands, or a voice. Without such sensory data, motion is a de facto clue to form. In a totally dark room, aided by nothing more than fifteen (often fewer) point-lights affixed to a walking person, we could tell if that person was male or female, happy or in a rage. We could tell if moving point-lights resembled us or belonged to somebody else. We could even make subtle distinctions about a person’s actions, such as whether someone is lifting a light or heavy object. Incredibly, with all but two ankle lights switched off, you would have been able to determine Voorhees’ sex with greater-than-chance accuracy – so long as Voorhees was moving! However, when point-light figures are static, their human form is rendered invisible. That is why Voorhees has had so much success with the ‘keep still’ condition; targets are unable to identify anything from the motionless point-light jumpsuit.

If Voorhees had employed Condition 1 in the experiment (‘move slowly toward victim’), you would have had a better chance of recognising the killer’s true persona – that of an adult PhD student with malicious intent. Theoretically, you would have then had time to flee, and if you were successful in doing so, Voorhees’ hypothesis would have been supported.

Let us consider what would happen in Condition 2: ‘move slowly away from the victim’. You might be tempted to think that this would result in even fewer murders than the condition where Voorhees approaches the victim (Condition 1). Research suggests that that is not necessarily what would happen. There is a facing-the-viewer bias involved in the perception of ambiguous, bodily motion. That is, observers are more likely to perceive that a person is approaching (i.e. facing the viewer), when there is no context to the viewed person’s depth or distance. The image below demonstrates the depth-ambiguity necessary to produce facing-the-viewer bias; figure A is facing us and figure D has her back to us, yet either could generate the silhouette, B, or the point-light stick figure, C. 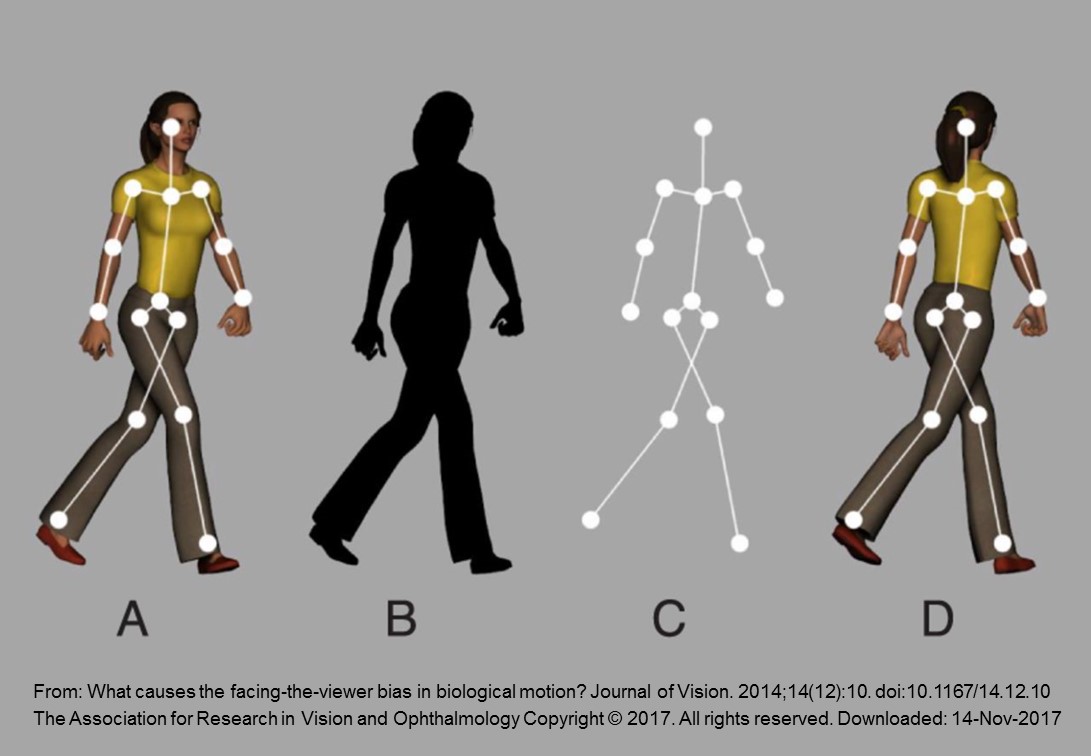 According to what is known about facing-the-viewer bias, it would not have mattered a great deal whether Voorhees approached you or avoided you. The apparent motion would be incoming, and so you would have likely either fled, cowered, or prepared for a fight. If you had have cowered or prepared for a fight, your fate would have likely been grim (i.e. death). If you had have absconded, it is possible Voorhees’ (non-apparent) retreat would last long enough to let you escape… before Voorhees stopped retreating and initiated attack.

For now at least, I shall leave it to your interest to theorise why depth-ambiguous walking figures tend to be interpreted as facing the viewer. You may begin with this trail of breadcrumbs, if you are so inclined.

You might be wondering now who qualifies as a suitable victim for the murderous PhD student? There is some evidence to suggest that Voorhees exploits the same information to select victims, as used to test hypotheses. Indeed, Gunns and colleagues’ experiments show that observers can discriminate walkers by ease (or difficulty) of attack, based purely on the kinematic cues exhibited by each walker. More recently, Book and colleagues demonstrated that people who exhibit certain psychopathic traits are more accurate judges of victim vulnerability from gait patterns, relative to people who rate lower in those traits. Perhaps Voorhees (i.e. someone with psychopathic tendencies) had time to secretly watch you walking around the campsite first. Thus, Voorhees saw an anomaly in your gait that indicated you would be easy prey!

Now I must unmask for you the true identity of our Voorhees character: none other than Jasmine Voorhees, female PhD student. (Are you surprised?) By wearing a hockey mask, baggy overalls, gloves, and platform work boots, she is able to convince any unexpected witnesses that she is a man. In fact, Ms Voorhees is using a perceptual phenomenon known as male-bias to her advantage.

Male-bias is the human tendency to report seeing a male, when faced with biological cues that are apparently neither male or female. The necessary condition for this phenomenon is perceptual ambiguity. So long as sensory data about someone else is ambiguous, that person will more than likely appear to us as ‘male’ – or conversely, ‘not female’. The male-bias effect is apparently pan-stimulus, too: increased tendency for male categorisations can manifest whether we are categorising gait patterns, static faces, hands, or whole-body curvature by sex, so long as these different types of stimuli are perceptually ambiguous.

Ambiguity can be manipulated in different ways to produce male-bias experimentally. For instance, colour and texture can be stripped away from stimuli to produce silhouette hand, face, or whole-body shapes. With kinematic stimuli such as point-light walkers, a common method is to mathematically blend male and female point-light trajectories into a statistically sex-neutral walker. Whatever the approach, ambiguity links the literature on facing-the-viewer bias and male-bias; ambiguous whole-body curvature or point-light walkers appear to be facing the observer rather than facing away, and they appear to be more male than female. Why would ambiguity result in such an interaction of person perception biases, apparently independent of the particular stimuli presented to viewers?

My PhD proposes an explanation which I call the risk minimisation theory of person perception. I shall describe it here quickly, but intend to elaborate through subsequent articles. For now, you might like to access my free tutorial on the topic.

To summarise the theory, humans can normally discriminate aspects of personhood (e.g. an other person’s sex) because of the abundant availability of coordinated signals in the sensory environment. Indeed, the signals are not limited to biological dimorphisms (e.g. facial structure), but may also include cultural embellishments (e.g. perfume or jewellery). However, as perceptual ambiguity increases to levels that rival the level of signal availability, observers begin to rely more and more on prior expectation to make judgements about what they are perceiving.

According to this theory, male-bias, facing-the-viewer bias, and other phenomena (e.g. other-race effects) do not reflect a failing of perception in suboptimal environments. Rather, they serve an adaptive purpose; one of biological risk detection and management. For instance, males are on average physically stronger and more prone to violent behaviour than are females, and thus in ambiguous environs (e.g. a poorly lit street at night) they may represent a larger potential threat to personal safety. The ability to forestall and prepare for a fight or flight scenario is, therefore, enhanced by guessing that an unknown other is male. Alternatively, guessing ‘female’ carries a potential cost: the decision to approach a mysterious figure because of this hunch is – if it is incorrect – potentially dangerous.

Jasmine Voorhees’ PhD is on the science of person perception, and therefore, she has sound understanding of how the facing-the-viewer bias and male-bias work. She knows that her movements alone can betray important information about her identity and intended actions. She also knows that camouflaging her motion renders her (already obfuscated) form practically invisible.

Person perception science teaches how we are likely to act in response to incomplete information about others. This knowledge has important implications for workers who depend on such information to survive, such as tactical response, anti-terrorist or air security officers. A general goal in such lines of work is to protect oneself and the community from harm, and so officers are trained to lower their perceptual threshold for threat signals. A lower threshold means two things: greater signal reception, which is beneficial; and greater proneness to perceiving false signals. My PhD thesis demonstrated that perceptual phenomena such as facing-the-viewer bias, male-bias, and the own-race advantage can all interact in uncertain environments. This perfect storm of misinformation can lead an individual into harm’s way. A trained awareness of these and other person-perceptual effects is helpful in survival-critical situations, or simply when needing to decide if a stranger is friend or foe.

The jury is not yet out, so to speak, on how humans are able to judge others and their intentions based on incomplete information. If you have an interest in person perception science, or think of an ethical (non-murderous) hypothesis that perhaps requires testing, I invite you to drop me a line.

Just for starters, in an unfamiliar environment, the male advancing bias (i.e. the amalgam of facing-the-viewer bias and male-bias) would represent a sensible risk avoidance tactic. Nevertheless, at the time of writing this article, auditory stimuli (e.g. sounds of approaching or retreating, male and female foot-steps) have not been used to further generalise (or specialise) this theory. Such a test would make an excellent project for a psychology Honours student, as would plenty of other hitherto untested assumptions. Such projects on person perception could be valuable to forensic and law-enforcement agencies.

Please do write to me if you think of anything. I can provide professional research project supervision or consulting. More generally, I welcome any questions or discussion about the aforementioned article – thank you for reading.

View all posts by Site Admin

2 thoughts on “How does Voorhees select victims?”